One of TCM’s projects for the month is to focus on movie series – and show marathons of things like the Johnny Weissmuller Tarzan movies. All of them. Even Ann Sothern’s Maisie movies ran out of steam before the end, so watching every Bomba the Jungle Boy programmer gets to be too much of a not very good thing. It’s kind of like drinking a bottle of chocolate syrup instead of drizzling the syrup judiciously over your main feature ice cream.

The Weissmuller Tarzans become unwatchable largely because Tarzan out of the jungle is uninteresting and somewhat grotesque, and there was only so much you could do with him in the jungle. Especially after Maureen O’Sullivan had had enough with the series and left Tarzan without his primary foil. I’m also not sure that learning English was to the character’s advantage. And although Weissmuller remained impossibly broad-shouldered until the bitter end, like any other human male, he looked a lot better in a loincloth when he was 28 than he did when he was 44.

(Weissmuller was far from young when he first played Tarzan. Remember that he had an entire Olympic career – gold medals in both 1924 and 1928 – behind him before he got to Hollywood. The story – a classic case of se non è vero è ben trovato – is that he was discovered for the role when screenwriter Cyril Hume saw Weissmuller emerge from the pool at the Beverly Wilshire Hotel. If you saw all six-foot-three of Weissmuller emerge dripping wet from a pool, you’d have cast him in something, too.)

While the Tarzan movies declined exponentially, the early ones bear watching, especially the first, MGM’s Tarzan the Ape Man, released in 1932, and given the studio’s full glossy treatment. Most Tarzan movies are programmers that were made on low budgets, but MGM started the ball rolling in grand main feature fashion. In addition to a seemingly endless supply of second-unit wildlife photography, little expense was spared. The herd of elephants alone must have cost a pretty penny, to say nothing of the pygmy village that was built just so the elephants could trample it. And all those grotesque pygmies (“dwarfs” as Neil Hamilton corrects Miss O’Sullivan, I suppose to bring her into line with early 1930s political correctness) needed to be paid as well. (I don’t even want to think about what was done to assemble so a large corps de ballet of undersized Africans to play the chanting bad guys who lower their captives into a pit inhabited by a man in a gorilla suit.)

The plot is duly ridiculous, but can actually be followed. There’s even a slightly skewed ecological message: leave the elephant graveyard alone, and white people only belong in the jungle if they’re willing (like Jane at the end) to live in the jungle on the jungle’s terms. It’s rather a green message, especially for 1932.

I would like to propose a new drinking game: watch Tarzan the Ape Man, and, every time Maureen O’Sullivan emits one of her ear-splitting screams, you have to do a shot. I guarantee that no one will be conscious by the time Tchaikovsky provides the musically undignified climax to the movie. Never a favorite MGM player of mine, O’Sullivan is unwatchable (and unlistenable) for a lot of the movie’s length. Strangely, she’s far easier to take during what were probably the hardest scenes for her as an actress: the ones with Weissmuller in which she has to do all the talking.   That can’t have been easy, especially as she must have known that she was being upstaged by a nearly naked jock with no acting background.

And upstaged she was. The movie starts off as a long 35-minute scream-studded slog before we finally get to hear the Tarzan yell and see our unclothed hero swing into view. Once Weissmuller appears, the movie picks up considerably because he is so good at what he has to do. Weissmuller’s is a marvelously subtle and well acted performance, even if he has only half a dozen lines of dialogue and has to do the whole thing in the sparest of loincloths.

Early 1930s audiences weren’t used to seeing male near-nudity on screen, and, of course, the savage jungle man conceit made that near-nudity possible because it served a narrative function. In those days, you couldn’t just get a man’s shirt off for the sake of getting his shirt off: the entire point of the unlikely boxing movie The Crowd Roars was to get a barechested Robert Taylor on screen. 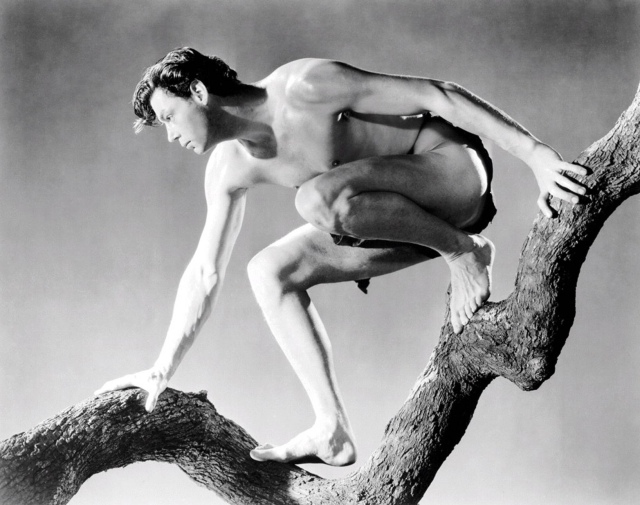 Weissmuller came by his physique honestly: he was an athlete and was built for his sport. Swimmers have very nice bodies, and Weissmuller’s body was the result of hours spent in the pool, not hours spent in the gym with personal trainers sculpting his body to Michelangelo’s David standards. Accordingly, in addition to those enormous shoulders, he’s very broad and developed across the chest, with less impressive arms (especially by today’s standards.) He still looks darn good in that loincloth, and, in the best scenes, is lovingly but not fetishistically photographed in what there is of it. From the shoulders up, Weissmuller wasn’t particularly handsome, although he did have a good profile, and considerable photographic subtlety was used when lighting and capturing the angular planes of Tarzan’s face. From what I can establish, Harold Rosson was the cinematographer responsible for the sections of the movie shot in Hollywood. (The other cinematographer credited, Clyde de Vinna, who preferred location shooting, had shot 1931’s Trader Horn. That shoot in Africa provided the second unit footage of African animals being African animals in Africa.) I’m thus going to guess that Rosson, “known for his subtle and imaginative lighting” did the Weissmuller material. His lighting is indeed subtle and imaginative, and makes Weissmuller look highly attractive (better than he looked in his offscreen stills), emphatically male, oddly fascinating…and not quite human. Which is the whole point.

The success of Weissmuller’s performance, above and beyond his looks, is that he conveys the idea of a half-savage half-man, not unlike all those African animals caught the year before when filming Trader Horn. I’m not sure why he’s called an “ape man”, as there is nothing ape-like about this Tarzan (when was the last time you saw a gorilla swinging on a vine?), but he certainly is a wild animal who needs to be approached with caution…and (this is the crux of the movie) respect.

There’s a convincing differentness about Weissmuller in Tarzan the Ape Man, and it’s that that makes the movie. It is the kind of performance that captures the viewer’s imagination and (Edgar Rice Burroughs’ reservations notwithstanding) the nature of the character.

Tarzan the Ape Man was such a hit that a rash of knockoffs soon appeared. After an outing as Kaspa the Lion Man (Tarzan by any other name) in King of the Jungle in 1933, Sol Lesser Productions put an otherwise virtually untried Buster Crabbe into a serial, Tarzan the Fearless, that same year.

I don’t believe that Tarzan the Fearless (the story of which bears the Edgar Rice Burroughs imprimatur) survives as anything more than an 86-minute feature cobbled together from the original 12 episodes.  As might be expected, the feature is a hopeless jumble.  As there was no MGM-style budget for pygmies, this Tarzan gets to contend with a band of Arabs on horseback (the head Bad Arab has what seems like a Gypsy Girl sidekick), some Egyptian types (Ancient Egyptian costumes must have been on hand), the subterranean temple of the God of the Emerald Fingers, and the usual lions and angry natives, who remind us that we’re supposed to be in Africa.

Tarzan the Fearless is an impossible mishmash — the serial must have been better – but it does have Crabbe’s go at Tarzan. And, as a friend of mine often puts it, “oh, my.” 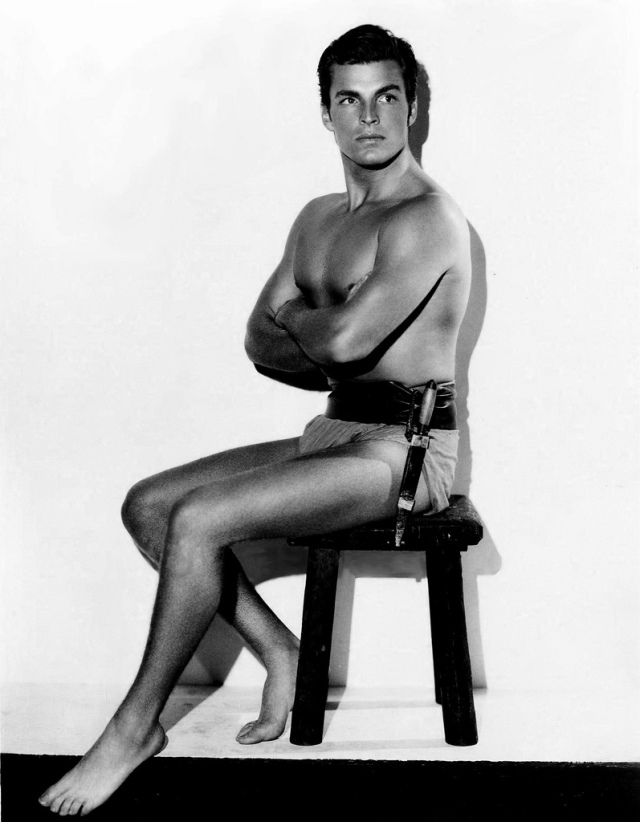 Crabbe was an Olympic swimmer too, and competed in both 1928 and 1932, picking up a bronze in his first go and a gold medal the second time. Four years younger than Weissmuller, Crabbe made his way into pictures almost immediately after winding up his Olympic career. And for good reason. I wrote above that Weissmuller didn’t have an especially handsome face; Crabbe was simply drop-dead gorgeous. He may have found his niche as King of the Serials (his Flash Gordon defines the genre for posterity), but he was probably as good-looking as any of the other dazzlingly handsome screen heroes of the 1930s. Probably better looking from the neck down (his body was more classically proportioined than Weissmuller’s with its hulking shoulders) – as, not only Tarzan’s, but Flash’s “wardrobe” shows:

Clad in what amounts to a thong (as opposed to Weissmuller’s loincloth), Crabbe swings through the jungle like some radiant boy god. He gives us Balanchine’s Apollo rather than Rice Burroughs’ ape man. I’m clearly not complaining, but the study in differences is interesting.  Crabbe’s Tarzan smiles and even laughs, and uses the chimpanzee more as a teddy bear than as an interlocutor.  The way he holds the chimp is adorable:  it’s the 1930s answer to Ryan Gosling cradling a puppy.

Crabbe also gets fetishized by the camera, nowhere moreso than in the scene that finds him lying unconscious, leopard-print thong artfully arranged, in a lion trap. (Given that lions can climb in and out of the pit, it’s really not much of a trap.) He’s got It, too. Weissmuller and O’Sullivan may have defined Tarzan and Jane for all time, but, for all the risqué things they do by their day’s standards, they still come off decidedly chaste. Crabbe and Hollywood blonde co-star Jacqueline Wells/Julie Bishop generate a whole lot of heat. There’s no doubt that this Tarzan and Mary are messing around when we’re not looking. (As radiant boy gods go, Crabbe’s Tarzan is pretty randy.)

The point here is that, while he’s delectable to the eye, Crabbe simply isn’t Tarzan. He’s a gorgeous male model swinging around on vines when he’s not parading around in a thong. That’s not too sharp a criticism, since an entertaining serial must have resulted, although it’s hard to tell from the jumble to be seen on YouTube. Nobody ever intended that these serials be taken seriously. (Crabbe’s knack for the genre was his willingless to play them absolutely straight while yet conveying a sense of humor. Acting with a good script that makes sense is a great deal easier than playing Flash Gordon.)

Crabbe, by counterexample, shows just how great Weissmuller’s achievement over at MGM is. Acting a convincing Tarzan, with neither costume nor dialogue, is not an easy assignment, but, with the connivance of MGM’s deluxe treatment and such niceities as careful lighting (not afforded Crabbe), Weissmuller creates an iconic screen persona that is also a darn good piece of acting. You can see why it grabbed the American consciousness and begat far too many sequels and knockoffs. If you can put all of that aside (okay, you’re allowed to have the image of Crabbe in his thong seared into your mind), Tarzan the Ape Man is quite an achievement.

If only Miss O’Sullivan didn’t scream so bloody much.